how did it break ?
in five pieces
a sacred circle
left on a wooden windowsill
under the glowing light and the gaze
of Stacashal
where there’s smokiness
embedded in warm dark jumpers
it’s a vivid belonging
on a salty rock
and it’s piecemeal
[text from piecemeal barnacle exhibition]

A conversation between objects and text; retrieved from the ocean and washed up on the shoreline, emerging piecemeal.  Sculptural objects are assembled and formed within the gallery space; with forms, folds and fragments created in-situ.

Textures are liquid, soft and rocky; resembling the watery, the sandy shores and the barnacled. Chalk, milk and earth thicken with peat ash and plaster, colours remains muted and pastel, like plastics worn and weathered by the ocean but with the touch of the human hand. The work has an ephemerality yet also stillness, existing somewhere between the eternity of the abyss and the current of the surface waters.

The texts are addressed to a new owner. They often describe small and intimate temporal moments, interactions, and sights of imagined significance, and reflections on place and the elemental. They mimic the sensitivities of the sculptural work in their intimacy and concentration on texture, colour and sensation. Throughout the text works the sea is used in parallel with descriptions of the personal, existing as an alternative realm to the human habitat of the land. In a similar way language accompanies sculptural works through titling to reflect an element of the personal.

The presence of the sea is evident throughout Alex Hackett’s work, existing in the nature of the sculptural forms and materials, many being found on the shoreline itself, with others imitating textures, effects and life within the sea. It is a continually changing body of water, a carrier of abundant life and energy, with its appearance constantly altered by its surrounding colour, light and weather. Fascination with the sea lies in its mysteries; its unknown depths, creatures and stories. In the novel Moby- Dick, Herman Melville captivated by the sea, wrote “there is one knows not what sweet mystery about this sea, whose gently awful stirrings seem to speak of some hidden soul beneath”[1]. This mystery and unknown sublime is retained in the work through absurd and imaginative objects, merging found materials from the sea and made materials by the artist.

The nature of the sculptural objects, as brought directly from the cluttered environment of the studio and assembled within the exhibition space encourages a vivid sense of their creation. There is a happenstance quality to their forms, some lie broken at the weakest points, with fragments of their bodies in plaster, sand, scattered at their feet and hinting of the movement involved in their assemblage. This is similar to the way in which Karla Black describes the final form of her work, “practicalities create accidents … how I can make something stand up, or how I can hang it often determine what a work is.”[2]   Even gentle unravelling of Alex Hackett’s sculptural work can cause breakages and new forms to arise. In piecemeal barnacle, inners of sculptures are displayed alongside their wrappings, casings and crumbs. Displaying these evidences of their creation emphasises the beauty in the ephemeral. Sometimes everything is broken.

Delicate shell rubbings on napkins are draped on a wooden rod, avoiding the walls of the gallery. Sculptures are placed on and close to the floor. The work’s placement requires specific acts of looking, and close observation from the audience, encouraging a method of looking not dissimilar to that of a beachcomber on the shore. Kathleen Jamie refers to this focused act of looking closely, emphasising the value of the “care and maintenance of the web of our noticing”[3], even elevating the act of observation to a prayerful one and crucial to engagement with the wider world.

The objects are a combination of found, made and assembled. Found objects usually have personal significance, from a particular place and time and often reappear in the text works. Some materials refer directly to place, with peat ash and salt from the Isle of Lewis, bleached seaweed from Lindisfarne and shells from Scottish shores. The plaster objects reveal the processes of their making, some lying in their skins and shells. Creases and wrinkles form on material, pulled like skin by force, tidal. The sculptures involve spontaneous decisions, layered quickly as the plaster sets. Objects are made intuitively, as are the small sculptural assemblages and larger installations in gallery spaces. The resolved work builds upon objects, natural patterns and structures observed within both natural and manmade landscapes.

The work created for ‘COAST’, adopted visual elements of the Dunbar shoreline; drawing on a unique turquoise colour deposited on shells, and the deep red sand of the local coastline; both incorporated into sculptures mimicking the man-made rocks lining parts of the coast. The objects become unfamiliar creatures, laid out like underwater archaeological finds, yet with an element of the touch of the human hand in their delicacy.

These combinations of natural and manmade material are uncomfortable yet simultaneously belong. Shimmering blue glitter coats a gingerbread cake wrapper and its crumbs, imbuing a grotesqueness to a perhaps comforting object, whilst imbuing a synthetic value in a usually cast-away object, as it lies on the floor.

Anthropologist Mary Douglas writes of holiness and impurity being oppositional, similarly this piece brings the stain and the disposable in to the realm of what is seen as sacred or treasured.  This positioning and use of contrasting materials questions our value of material objects, what is kept and discarded, the sentimentality of objects. “Reflection on dirt involves reflection on the relation of order to disorder, being to non-being, form to formlessness, life to death”[4].

Edible materials are used frequently in Alex Hackett’s work, most often for its intriguing sculptural forms. Popcorn is used frequently for its coralline form and subtle colour. Cast in plaster it creates a new and unfamiliar creature. The popcorn coral elevated on a bleached yellow pillow acquires a new value and emphasises a preciousness and fragility to the absurd and unexpected. Hinting at a personal language and romanticism. Pastel pink spherical sweets leach their colour in a tide mark onto white plaster.

Plaster pieces are propped on bleached wooden rods, balanced against walls and surfaces of the gallery, evoking sea stacks and a sense of a recent high tide.  A long rod rests up on a small wooden column, surging in with the tide from the window of the gallery. The positioning of the objects creates a sense of stillness in what has passed, yet also a readiness for an anticipated motion, and tentativity in their precarity. The work hints of the larger environmental situation, a calm in coming chaos, anticipation within the Anthropocene.

This balance between stillness and motion is particularly evident in the installation I’ll take you to the shore / to show you the dog rose. This suspended work responds directly to the experience of being on a sailboat in the Outer Hebrides, watching the flicking movement of the small lengths of rope, reefs, which determine the level of the sail and reveal the action of the winds. With reefs encrusted with salt, sand and shells and hung in the gallery space from a wooden yard and eyelets, the work adopts aspects of the construction of the sail whilst maintaining a delicate nature. Many of Alex Hackett’s sculptures incorporate movement and dynamism in their form, resembling living beings. This sculpture acquires a gentle movement through its suspension from a single point, tilting gently in the space, with the reefs moving independently in small breezes. Bringing this object into the gallery gives it a sense of stillness, away from the sail’s natural environment out on the sea. This is emphasised by the time-based processes involved in its making, with slow processes of evaporation creating the salt encrusted reefs. 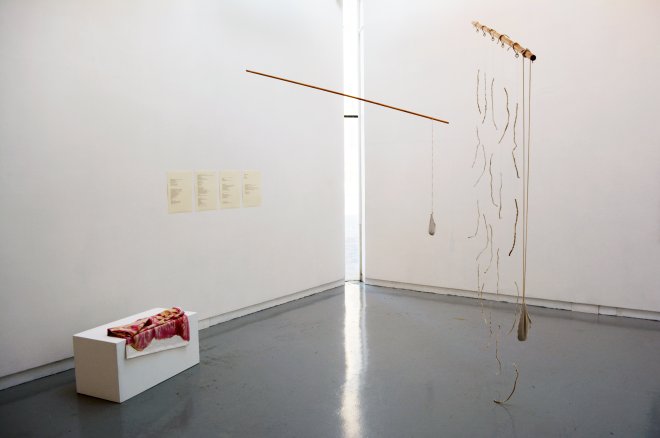 I’ll take you to the shore / to show you the dog rose Wood, metal, rope, salt, sand, shells, pocket. ‘Ropes of Sand’ An Lanntair, Stornoway, 2017 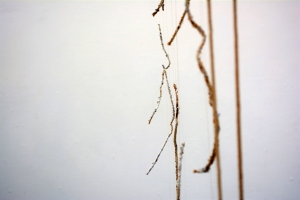 In other works, Alex Hackett balances objects within themselves, often combining the natural and unnatural into absurd compositions. A curved piece of plastic buoy appearing burnt and sea-washed, a flat shrimp cracker resting within and a curled silverleaf cradled in this material clutch. These assemblages create a sense of human touch, as they evoke the cupped hand, a cradling and gentle nature. As the artist Michael Dean writes “all shores describe touching”[5], emphasising this overlap between the natural world and our own.

I’ll take you to the shore to show you the dog rose [detail] Dyed cloth, buoy, cracker, silverleaf. ‘Ropes of Sand’ An Lanntair, Stornoway, 2017

Alex Hackett is an artist and writer soon to graduate from the Art Space and Nature MFA programme at Edinburgh College of Art.  She has exhibited at An Lanntair, Stornoway, the Dunbar Town House Gallery and Edinburgh Centre for Carbon Innovation.  Her work exists across fields of poetic text, small-scale sculpture and the edible, to form installations with a dialogue surrounding the natural world and the intimate.

The exhibition ‘piecemeal barnacle’ was at Tent Gallery, Edinburgh College of Art, 9-10 February 2017.