‘The Exploded Studio’ elective is a component of the ASN programme where works are developed for the specific context of ECCI,  https://edinburghcentre.org in keeping with the aim of the course, to engage with a public audience out with the studio.

The students looked at different aspects of the Carbon issue, in cognisance of the work of researchers at ECCI, in direct engagement with climate change as subject matter. The works were also developed with the physical space in mind, to form an exhibition that was fully integrated into the space.

Numerous approaches were taken in both media and subject area, in what was a compelling and dynamic exhibition. 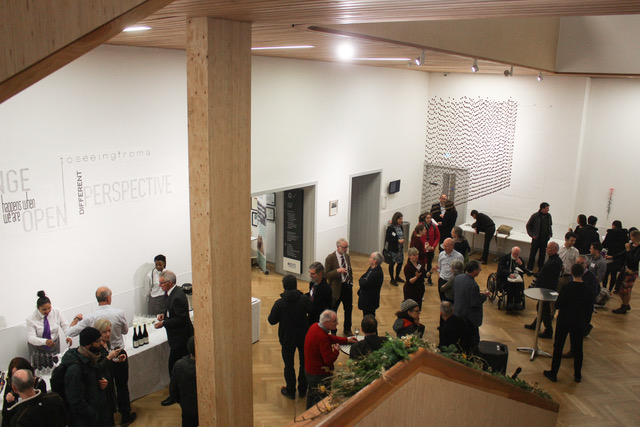 Three of the students;  Hsin Shyu, David Kramaric and Ana Cecilia Parrodi Anaya made films, which can be viewed via the links, below..

Hsin Shyu’s is entitled ‘a’, the symbol for acceleration, in which the exponential is visualised through the metaphor of a journey..

In ‘A.I.R. Fresh Air Chamber’ David Kramaric imagines a fictitious product and markets it in his pastiche of consumerist advertising..

Kaixin Li’s poster, ‘Virtual Future’ also imagines and markets a fictitious product, the Eco Dome, in what is a speculation on how climate change will affect product design.

In a seated alcove at the entrance, Pantea Armanfar’s ‘White Noise’ is a sound installation; a sonic and sculptural exploration of the peat bog, where the audio is accessed by the viewer scanning a QR code.

Within the main atrium, suspended in space, the exhibition is centre pieced by Harmony Bury’s ‘The Potential Forest’.  This installation, with its 2,500 acorns, alludes to both the metaphorical and literal potentiality embedded in the work. The 2,500 oak trees occupy the same area as is required for one head of cattle. Raising questions about our land choices, which can either mitigate or contribute to climate change.

In a developing research interest with Scotland’s peat bogs, shared with Pantea Armanfar, it is the detailed rather than the soundscape which led to ‘Will You Let Me Die’, by Lucy  Havens. Sphagnum moss grows and dies simultaneously, repeatedly absorbing carbon and carrying it to the bottom of a bog. Scotland’s largest peat bog stores over 400 million tons of carbon.

‘Will You Let Me Die’, is a beautifully crafted model of a single strand of Sphagnum rubellum, one of 34 species of sphagnum moss in Scotland.

Carbon sequestration also featured in the work of Claire Burnett in her digital print, ‘Every 30 Hours’,  reflecting on our personal responsibility. On average, someone living in Scotland would be required to plant a tree every 30 hours to compensate for their carbon footprint. This equates to an average of 22,098 in a lifetime.

Two students engaged directly with the exterior space of the building. Firstly, Kaitlin Ferguson with ‘Terminus’. The work was made in response to the dramatic recession of the Alison Glacier in Western Greenland. It showed, in series, the decrease over a fourteen-year period (2001 – 2015). The mirrored surface alludes to the albedo effect and reflects the viewer in the work itself, implicating us in climate change.

Andreas Papamichael originally proposed an installation which would have partially blocked access at the entrance to the building. The work causing delay and detour to those entering and leaving. That proposal was disallowed, due to fire safety regulations.

In response, Andreas exhibited ‘A Proposal That Was Disallowed’ The work raises questions on how humanity has placed nature in a position of secondary importance, seeing it only as a resource. 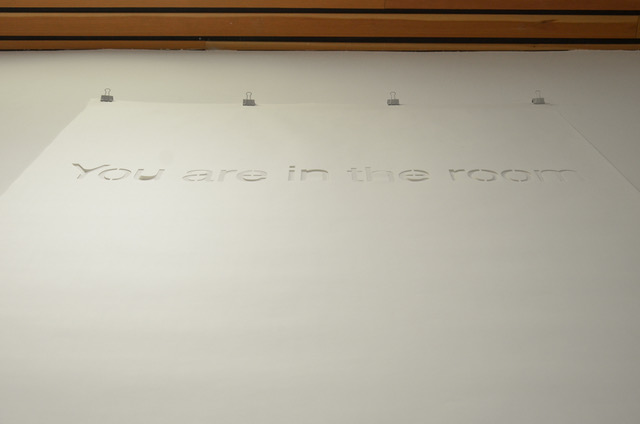 Lilien Li’s, large scale intervention consisted of a large paperwork, with cut out text which ‘depicted’ the space between cognition and consciousness. ‘Between’ occupied the full height of the space to emphasise the space with visual simplicity.

Kharis Leggate’s disrupted text piece played with typography in ‘The Way’, requiring the viewer to slow down their natural pace of reading. the hand-drawn element of the text suggested the change needed to survive climate change is worth our time and effort.

Pin-Erh Chen, tackles the politics of climate change with power yet visual simplicity, which understates the depth of research undertaken for the work. ‘Doubt Is Our Product’.

The work comprised of hundreds of quotations from climate change deniers, sourced from 1989 to 2018. These deniers are either scientists, who are supported by big fossil fuel companies, or politicians, whose only care is profit. The lies were presented piled on a plinth, with a QR code providing considerable information, about the lie and liars.

A powerful endpoint to a powerful and successful exhibition made possible by our partners and friends at ECCI.