In the final one of the series of MFA solo exhibitions in ASN’s Tent Gallery, Russell Beard presents a selection of intaglio prints and sculptures in a minimal and poetic use of the space.

The works are the result of an on-going exploration at the intersection of Heideggerian philosophy, deep ecology, and quantum mechanics. It constitutes part of an on-going investigation into the origins of our own vital materiality, the nature of growth and how certain properties emerge from complex chaotic systems amid the on-going oscillations between the creative, generative forces of life’s perpetual becoming and the dissipative cosmic processes of entropy and decay.

With a background in science, speculative realism and documentary storytelling, Russell questions whether our current theories about the nature of things – the essence of matter at the very smallest scale, correlates (or not) with our lived experience of the world. Is it possible to communicate truthfully what is not immediately perceptible at our human spatio–temporal scale? – is there a way to access the immense complexity and vast cosmological differences in size from the Plank length to the edge of the universe?

“Fieldworks” is a body of work based on a close reading of the current theories of loop quantum gravity and the intuitively familiar principals of granularity, relationality and indeterminism.

Produced by applying pigment to paper at high pressure with chemically etched metal plates – each print appears as continuous colour field but on closer inspection they separate into discretely quantized lattices.

Emerging from the highly complex mesh of spectral lines and particles is an order generated by a four-way symmetry conveying a sense of the sacred, similar to a mandala or a form of religio-spiritual symbolism, that hints at the similarities between Buddhist philosophy and the quantum mechanical world view – the equations of which predict the contents of the periodic table of elements and provide compelling scientific proof that the nature of reality is indeed a constant flux of interacting fields of energy suggesting a profoundly relational underlying unity of all things.

This show is the latest in a series of artistic investigations into our vibrant materiality – and an attempt at not simply representing the nature of reality at the finest granular scale available to us but (as with the so called “redox reaction” central to the etching process – which sees an exchange of electrons from copper sulphate and zinc) it is an engagement with materiality at the quantum level. 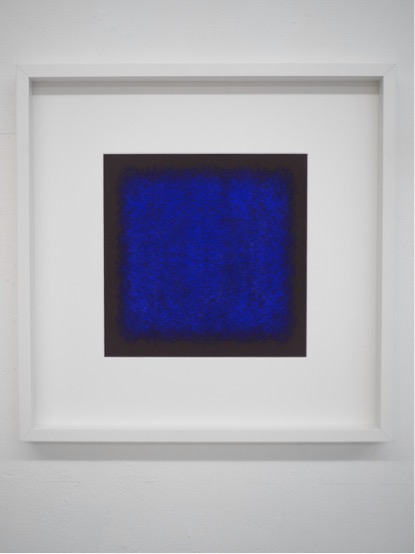 DAESIN “WHAT IS PRESENT” or “THE EVANESCENCE OF ALETHEIA”

A heuristic representation of the space-time field, “which ripples and bends like the surface of the ocean” C.Rovelli

Newton’s explanation of the space between us – this could be read as the nature-culture nexus or a meeting of Heideggerian “EARTH” with its un-masterable chaos and complexity  – and “WORLD” of mans culture, ambition, purpose and the unending urge to step outside of time, to survive death.

“nature art creates machines that change attitudes, paradoxical devices that upgrade human consciousness changing peoples relations with one another and with non humans… we need art that does not make people think (we have quite enough environmental art that does that ) but rather that walks them though an inner space that is hard to traverse”  T. Morton Hyperobjects p184